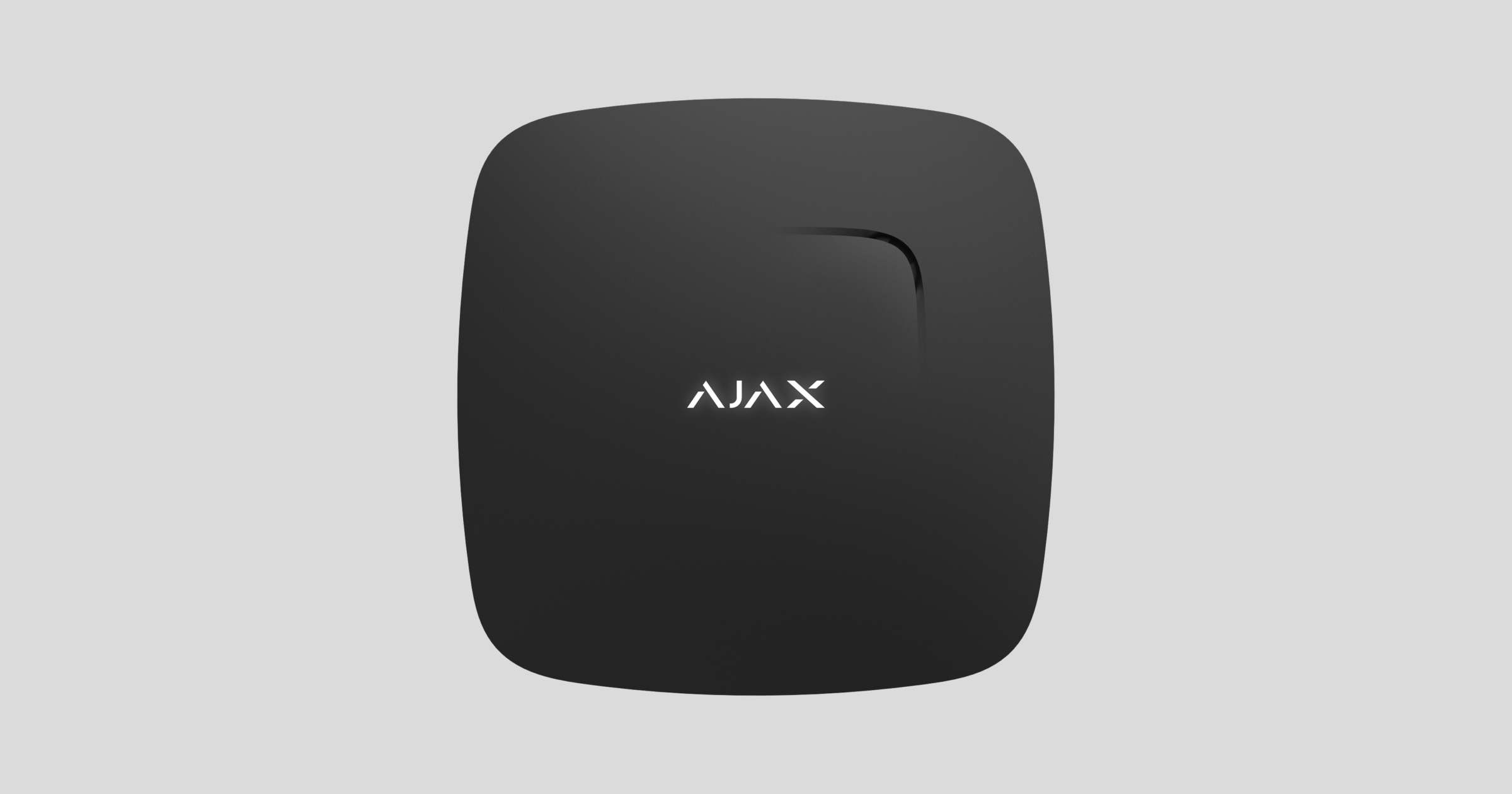 FireProtect is a wireless indoor smoke detector with an in-built buzzer and a battery, ensuring up to 4 years of autonomous operation. FireProtect can detect smoke and rapid temperature increase.

Connecting to the Ajax security system via a secured Jeweller radio protocol, FireProtect communicates with the hub at a distance of up to 1,300 m in line of sight.

The detector can be a part of third-party security systems, connecting to them via the uartBridge or ocBridge Plus integration module.

The detector is set up via the Ajax apps for iOS, Android, macOS, and Windows. The system notifies the user of all events through push notifications, SMS, and calls (if activated).

The device detects smoke with an optocoupler which consists of an infrared emitter and a photodetector placed in the smoke chamber. When smoke enters the chamber, the photodetector detects it by the infrared beam distortion. This distortion triggers a smoke alarm.

When the temperature exceeds 60°С or rises by 30°С during 30 minutes (not necessary to reach 60°С), the detector registers temperature increase, which triggers a fire alarm.

The life span of the FireProtect detector lasts up to 10 years. In the event of a detector failure, you will receive a corresponding notification — it will need to be replaced or submitted for comprehensive diagnostics.

In case of alarm, the detector activates the built-in buzzer (the siren sound can be heard from afar) and blinks with the light indicator. When connected to a security system, both the user and the security company are notified of the alarm.

The siren of the device can be turned off using three ways:

Please note that for this to work you need to priorly select Mute Interconnected Fire Alarm command for this button in the KeyPad/KeyPad Plus settings.

If smoke and/or temperature levels do not restore to normal values, in 10 minutes, the FireProtect turns on the siren again.

Connecting the Detector to the Ajax Security System

Connecting to the hub

Pairing the detector with hub:

To make sure that the detector is on, press the on/off button — the logo will light up red for a second.

For detection and pairing to occur, the detector should be located within the coverage area of the wireless network of the hub (at a single protected object). The connection request is transmitted for a short time: at the moment of switching on the device.

If pairing with the hub fails, the detector operates autonomously; switch off the detector for 5 seconds and retry.

The detector connected to the hub is displayed in the list of devices in the app. The update of the detector status in the list depends on the device inquiry time set in the hub settings (the default value is 36 seconds).

To connect the detector to a third party security central unit using the uartBridge or ocBridge Plus integration module, follow the recommendations in the manual of the respective device.

The smoke detector always operates in the active mode. When connecting FireProtect to third party security systems, it is appropriate to place it in a permanently active protection zone.

The function activates built-in sirens of all fire detectors if at least one of them is triggered. Sirens are activated within the hub–detector ping interval according to the Jeweller settings.

in the Ajax app
2. Select a hub
3. Go to its Settings by pressing

Interconnected alarms are supported by FireProtect detectors with firmware versions 3.42 and later. Please note that when you turn on the interconnected alarms, you cannot set the hub–detector ping interval (Jeweller settings) of more than 48 seconds.

6. If necessary, set the Delay of Interconnected Alarms from 0 to 5 minutes (in 1-minute increments). The option allows you to postpone the interconnected alarm for a specified period of time.

When this option is inactive, the interconnected alarm is sent to all fire detectors within a minute.

The function works as follows:

1. One of the FireProtect detectors detects an alarm.
2. Delay of Interconnected Alarms starts.
3. The built-in siren of the fire detector informs the alarm. Users receive notifications in the Ajax app (if appropriate notifications are enabled). At the object, Ajax sirens are activated (if the corresponding settings are enabled).

4. An alarm confirmation event is sent to the monitoring station and security system users, and the system starts the interconnected alarm for fire detectors if:

To give more time to eliminate the cause of false triggering of the detector, the user can delay the propagation of the interconnected alarm for another 10 minutes:

5. If necessary, activate the Ignore First Alarm option. This setting is recommended for premises with potential sources of false alarms. For example, if the device is installed in a place where dust or steam can get into the detector.

The option functions as follows:

1. The detector reports a smoke alarm and activates the built-in siren.
2. The built-in 30-second timer of the detector starts.
3. If after 30 seconds the detector still detects a threat, an alarm is sent to the hub.
4. Hub sends alarms to all users and to the Central Monitoring Station (CMS) of the security company.

Residential fire alarm system is an Ajax system feature that defines user and device rights to mute the interconnected alarms of fire detectors.

If the feature is enabled, users can silence fire alarms of triggered detectors only in the groups to which they have access. And Button, KeyPad, KeyPad Plus — the alarms only of those fire detectors that are in the same group.

The feature is useful for objects consisting of several rooms and protected by a single hub. For example, for multi-apartment complexes where each flat is a group with at least one fire detector installed. In this case, users can respond to the alarms of their groups without silencing the alarms of other groups.

The feature is available for Hub Plus, Hub 2, Hub Hybrid and Hub 2 Plus on OS Malevich 2.12 and later versions.

The tests do not start straight away but within a period of 36 seconds when using the standard settings. The test time start depends on the settings of the detector scanning period (the paragraph on “Jeweller” settings in hub settings).

According to the requirements of EN50131 standard, the level of the radio signal sent by wireless devices is decreased during the test mode.

You will receive the notification in the Ajax app regarding the test result and detector status.

The location of the detector depends on its remoteness from the hub, and obstacles hindering the radio signal transmission: walls, floors, large objects inside the room.

Check the Jeweller signal level at the installation location

If after moving the device still has a low or unstable signal strength, use a radio signal range extender.

Install the detector at the ceiling in the highest point where hot air and smoke are concentrated in case of fire.

If there are any beams at the ceiling, protruding by 30 or more centimetres from the ceiling level, install the detector between every two beams.

Before installing the detector, make sure that you have selected the optimal location that follows the guidelines of this manual!

If the LED doesn’t blink after fixing in SmartBracket, check the status of the tamper in the Ajax app and then the fixing tightness of the panel.

If someone detaches the detector from the surface or takes it off the attachment panel, the security system notifies you.

Autonomous Use of the Detector

The detector can be used autonomously, without connecting to a security system.

In case of autonomous use, the detector notifies of the detected fire/smoke with the siren sound and light of the logo. To switch off the siren, press the logo (there is a sensor button) or eliminate the cause of the actuated alarm.

Check the operational capability of the detector regularly. Clean the detector body from dust, spider web, and other contaminants as they appear. Use soft dry napkin suitable for tech equipment.

Do not use any substances containing alcohol, acetone, petrol, and other active solvents to clean the detector.

To a certain level, the detector ignores the dust in the smoke chamber. When the chamber becomes too dusty, the detector notifies the user of the need to clean it via the app (and beeps every minute and a half). Such maintenance is compulsory for the detector to operate correctly.

How to clean up the smoke chamber

Pre-installed batteries ensure up to 4 years of autonomous operation. If the batteries are discharged, the security system sends the respective notifications and the detector signal with a sound every 90 seconds:

Keep new and used batteries away from children. Do not ingest battery, Chemical Burn Hazard.

How long Ajax devices operate on batteries, and what affects this
Battery Replacement

Warranty for the Limited Liability Company “Ajax Systems Manufacturing” products is valid for 2 years after the purchase and does not apply to the pre-installed battery.

If the device does not work correctly, you should first contact the support service — in half of the cases, technical issues can be solved remotely!

The full text of the warranty
User Agreement